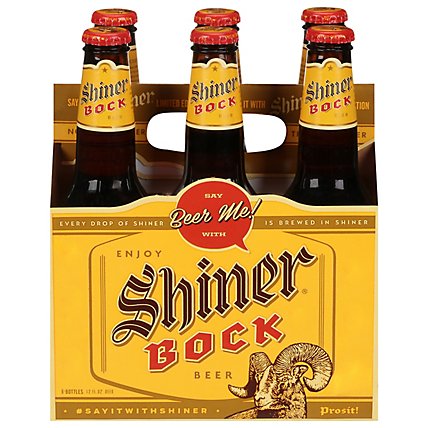 Limited Edition Every drop of Shiner is brewed in Shiner. Nothing's finer than a Shiner. Say beer me! with enjoy Shiner Bock. Prosit! Handcrafted: In the same brewery where it was first made back in 1913, this gently hopped medium brown brew is the pride of Shiner Texas. Handle with pride. Whatever it is, we say it with Shiner. Say it with Shiner Limited Edition. Bock Beer: Combines old World Bavarian heritage with American handcraft brewing for a smooth, delightfully drinkable dark beer Prosit! Kosmo Spoetzl and his Little Brewery: The Little Brewery was established in Shiner, Texas, in 1909 by German and Czech immigrant farmers eager to satisfy their thirst for the old-world brews of their homelands. In 1914, they hired Bavarian brewmaster Kosmos Spoetzl, whose recipes, expertise and passion for brewing excellence served as the basis of Shiner's first official beer, known today as Shiner Premium. In March 1915, Kosmos purchased the Shiner Brewery and thus began his 35-year stewardship. During that time, the brewery remained in operation throughout prohibition (1920-1933) by making ice and near beer, and later went on to enjoy steady growth and prosperity as Shiner Beers became a local favorite. In the late 1940s, Kosmos oversaw an addition to the brewery that introduced the distinctive white-brick facade that defines the building today. In tribute to our original brewmaster, the home of Shiner Beers is still known as the K. Spoetzl Brewery. Every drop of Shiner is still brewed and bottled in Shiner. We continue to handcraft beer with the same pride Kosmos Spoetzl put into every bottle over a century ago. We invite you to visit us in Shiner to see for yourself - we'll save a cold one for you. Certified Independent Craft Brewers Association www.shiner.com. (hashtag)sayitwithshine. Graphic Packaging International Please recycle your bottles. More bottles = more beer. Oh yeah, and it's good for the environment.

Contains: Government Warning: (1) According to the surgeon general, women should not drink alcoholic beverages during pregnancy because of the risk of birth defects. (2) Consumption of alcoholic beverages impairs your ability to drive a car or operate machinery, and may cause health problems.